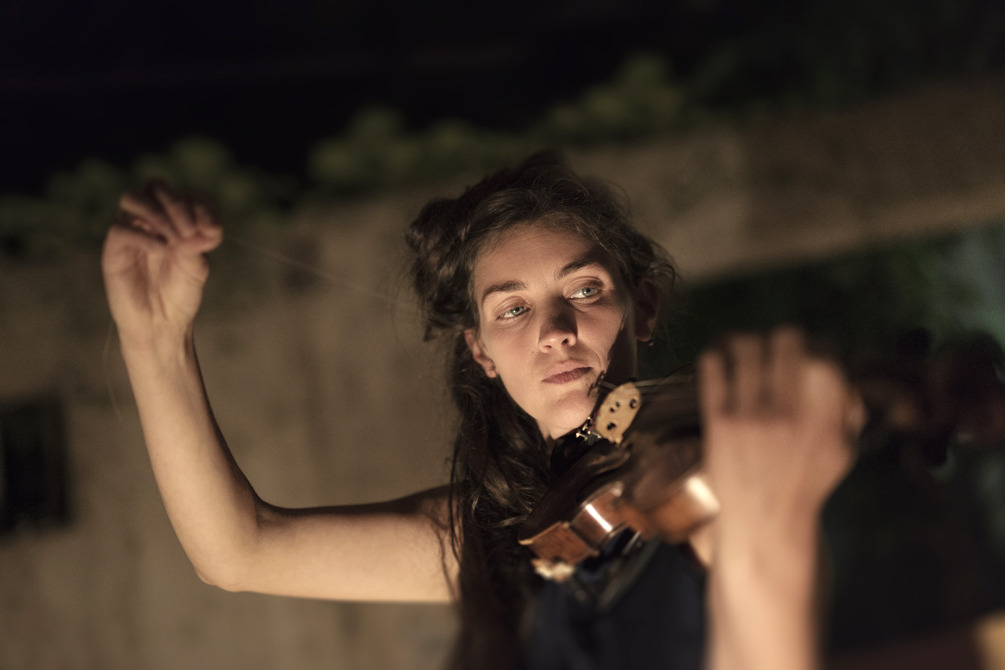 Sa Scena met Ana Kravanja, violinist by educational background and eclectic multi-instrumentalist soul of the slovenian band Širom, on stage on the evening of Friday 10th September at the Punta Palau lighthouse

Continues the path that brings us closer to the discovery of the 25th edition of Isole che Parlano, through the voices of the female protagonists.

Ana Kravanja is the voice, strings, percussion and much more of Širom, a slovenian band of “imaginary folk” and the festival’s first foray into the international scene with the common trait of free improvisation and mix of genres.

Since 2009 she has participated in the Sploh institute program, a laboratory born in Ljubljana to unite young people in free improvisation and which promotes the overcoming of creative boundaries in traditional music genres.

A sophisticated choice by Paolo and Nanni Angeli, well identified in Ana’s introspective but extremely concrete personality, an avant-garde performer with a rural soul and a symbol of an unconventional approach to art. A hymn to simplicity, in music as in life, which would be an invitation to break barriers through self-freeing from complexity and to accept diversity by embracing the unknown with curiosity.

An Italian music magazine (SentireAscoltare) has defined your music as “an impregnable but immediately familiar folk”. Is it correct to say that Širom makes contemporary music as familiar as folk?

Many people write about our music as folk music so we decided to use the expression “Imaginary folk”. We don’t want to sound like something that already exists, so we try to find unique instrument and sound combinations.

We are interested in different kinds of music. When we started to play with Širom, we had a few ideas of what we wanted to play, but then by improvising together we found out that our music was formed by itself. Like having an idea who you want to be instead of seeing who you really are. Now with years we try to follow music that comes out of our improvisations and to bring out the essence of what our music wants to be.

Making avant-garde / drone in 2021, with tamburica and kalimba, forgetting the use of electronics, is something that romantically takes us back to the post-rock current of the 90s in an acoustic key. In one of your interviews, I read that in your youth you came into contact with Slovenian punk culture; Iztok Koren himself comes from experiences in post-rock, punk and post-metal bands. What are the most underground (and furthest from classic) influences in Širom’s music?

About twenty years ago, when we started to play music in bands, we were playing different forms of rock, punk and hardcore music. But what influences us now are different things. On me and Samo (Kutin) a big influence had free improvised music and travelling around the world (Africa, India, South America, Iran), listening to traditional music and meeting new cultures, life and people. Life itself is an influence, everyday situations, our past, cultural history, everything and everybody we are surrounded by.

Your approach to music began at school in Divaca, with the flute (there was no violin course). Even in Italy the scholastic approach to music has been the same since time ago. What is your point of view on this kind of approach in bringing a teenager closer to music?

I was the one who wanted to go to music school, no one else in my family asked me or even forced me to do so. It was my own wish. I think every child feels if he/she wants to play music or not. Then the question is how the environment and your family support you later with that.

I think we should let children (and also adults) know the beauty of the rich spectrum of music that exists worldly and encourage them to listen or even to play. If a person has interest in music, he/she can always discover, research and reach it, also in older ages, what is essential is a desire, an openness for sound and music.

Tell us about your experience with Sploh Institute, a project born in Ljubljana to support young artists in improvisation, experimentation and unconventional modern composition.

I met Tomaž Grom (a director of Zavod Sploh) around 2009. By forming a weekly workshop of free improvisation, he joined many young slovenian musicians, who otherwise probably wouldn’t connect, because we were divided by music idiom backgrounds we came from (classic, jazz, ethno, rock). A free improvisation opened borders for us to play together. Practicing free improvisation on a weekly basis for many years with different musicians was a precious experience and informal education for me. We still collaborate, perform and play in different ad hoc groups.

Sploh is also supporting different media projects, unconventional ideas and experiments. One of my experiments was the project Glacies, a partly composed improvisation that I made in 2014 for eight musicians, playing on refrigerator shelves (https://www.youtube.com/watch?v=iiRS6cGiJDg), performed at Sound Disobedience Festival in Ljubljana (organised by Sploh).

I read that one of your biggest inspirations was the music associated with Butoh Dance, also known as the “dance of darkness”. Some moments of improvisation in your composition are emotionally disturbing, almost mystical (I am also referring to the use of the vocal line). Is there a parallel between these two expressive forms or is it a simple process of catharsis achieved with improvisation?

It is actually a performance by musician Seijiro Murayama and dancer Ryuzo Fukuhara that had a big influence on me in 2009. It was the first time I was blown away by a performance (especially by primitive and minimalist music by Murayama).

Expressing music and singing is for me usually connected by emotional and different states I am in. Music, especially improvisation, is a reflection of what we are and what we carry inside. Our past, the beauty we have seen or have heard, fears and traumas, desires, emotions and beliefs. And all the music we have ever heard and played.

In an interview you declared “you can not play free improvisation if you’re not free as a person”. With Sploh you actively contributed to a project called Sound Disobedience, a space created to enhance and practice improvisation by artists. In your opinion, does a person who aims to be artistically free, must “disobey”? How did Ana Kravanja become a free improviser?

To become an improviser you need interest, curiosity and a wish or courage for the unknown.

To be free as a person is a long path to walk.

To reflect, to open, to grow.

Širom is associated with a street spirit, rather than an urban one: we can perceive it not only from the compositions but also from the images of your live performances (secret concerts). This is combined with a rural form of “artisanship”, expressed by the creation of self-made instruments used in your compositions. Despite not wanting to be (rightly) labelled as traditional music, is there still a rural/local dimension that represents you as individuals?

In the past we (Širom) were for many years a part of different DIY underground movements, working voluntarily in musical clubs, organising underground concerts and festivals in different places in Slovenia. Now Samo and I are organising an annual festival of improvised music, dance, theatre and visual arts, held in a village where we live. It is a rural underground festival, run on voluntary contribution, without any public support. We take care of abandoned farms where we produce our own vegetables and preserve them for winter. You know what you put in the soil, you know what you eat, you stay in contact with the ground and you observe magical plant growth.

Making instruments is mostly Samo´s work and passion. It started by seeing or hearing a special instrument that he never saw before, so he tried to make it himself. By making or preparing an instrument you can get your own specific sound. Then you also have a different relation to this instrument. It is more valuable already in the beginning. With industrial and machine making humans lost a relation to things. It became unpersonal.

I think self-organisation and self-making are important issues. An alternative to a narrow-minded system and a profit-minded society we live in, is well needed. To develop ideas, create your world(s), your food, your clothes, your instruments, your music. To (try to) have a valuable relation to all existing.

Sardinia, which is going to host Sirom’s live performance, is a land of strong sense of tradition. Despite this, formats such as Isole che Parlano are well targeted on a “polite” audience, which has been formed thanks to the growing presence of festivals in which a mixture of genres has been the leitmotif over the years. Dealing also with your experience with Sploh, do you think that the presence of these formats in a territory can break down certain preconceptions that link the artist to the image of the traditional instrument he plays?

Education of the public by showing a different or unconventional use of instruments, voices and playing music is necessary. It is breaking the borders of conservative thinking and welcoming the acceptance of new ideas. It is an openhearted acceptance of different and unknown.

Tell us about the performance that Širom has scheduled for 10th September at the lighthouse port of Palau. What should the Sardinian public expect? Have you ever played at the foot of a lighthouse on the sea?

We are very, very much looking forward to this concert! We will play some new songs that we composed last winter. The Sardinian public should just relax and enjoy. When you don’t expect anything, the best things happen. Last year I was on holiday on one of the Croatian islands and we improvised with friends every night near the lighthouse, for birds, for the sea and for those who occasionally passed by. The lighthouse certainly is a very special place!